With the end in prospect for road traffic signs showing imperial-only vehicle dimensions, Ronnie Cohen takes a look at the current muddle.

A Minister of Transport once claimed that “drivers who have not received metric education at school would be confused by a change to metric units on road traffic signs” (Parliamentary Written Answer, 11 July 2002, Hansard, Col 1116w). In a previous MV article (link: https://metricviews.org.uk/2013/05/dft-guilty-of-making-unfounded-claims/), Ronnie Cohen asked the UK Department for Transport (DfT) in a Freedom of Information request what evidence it had for this claim and it responded that it had none.

New signs showing lengths of vehicles will now be dual: metric and imperial. On the other hand, as a result of politicians’ reluctance over the past 45 years to make the case for metric units on road signs, all distances shown on official traffic signs are in yards, miles and fractions of a mile only. The private sector often takes a different view, and being subject, not to the Traffic Signs Regulations and General Directions (TSRGD) but to Town Planning legislation, shows distances in metres without imperial conversions.

Distances to attractions, restaurants, MOT Centres and other private establishments are just as likely to be given in metres as yards. This use of measurement units reflects general usage rather than government policy.

Distances to car parks are also commonly given in metres: 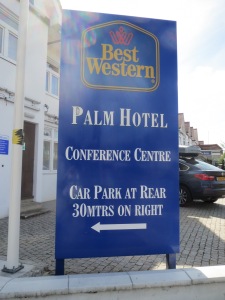 These metric distance signs are clearly aimed at drivers. Such signs are erected for private sector organisations and are not subject to the TSRGD. They do not count as traffic signs but are classified as advertisements under the Town and Country Planning Act 1990. Under town planning legislation there is no restriction on the measurement units that can be shown on them. Could it be that the private sector, including major supermarkets and oil companies, has more confidence in British drivers’ ability to understand metres than have the politicians?

As discussed in our previous article, new road traffic signs showing vehicle dimensions will always show both metric and imperial dimensions. Yet, oddly, metres appear alone in some places in the Highway Code, and drivers are expected to understand them!

Signs showing a maximum permitted vehicle height on private property are almost always metric. This prompts the question, “Why?” 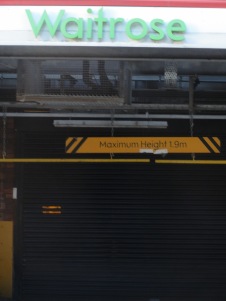 Private sector distance and maximum height signs for drivers normally use metric units because health and safety legislation requires this. They are widely used, and can be found all around us. As a result,drivers face a mix of metric-only, imperial-only (for the moment) and dual vehicle dimension signs. This has led to a large number of designs for road traffic signs showing vehicle dimensions. You can read about the proliferation these in this UKMA report:

The DfT currently uses cost as the principal reason for the failure to convert road traffic signs showing distances to metric. The UK is alone in the world in not permitting metric distances on road traffic signs. The USA uses non-metric measures on traffic signs but allows metric units to be used as an alternative to or alongside imperial units. Surely, it would cost nothing to allow supplementary metric units on signs showing distances and to insist that any new signs or replacement signs use dual units. And it should be possible to achieve this in less than 45 years.

You can find more metric signs at the following link:
http://www.ukma.org.uk/metric-road-signs