Ronnie Cohen looks back at the 1963 Worboys Committee report and reviews how well the current version of the TSRGD addresses the main criticisms of the earlier traffic signs system and the Committee’s findings and recommendations. He suggests ways that current signage can be improved to meet the Worboys ideals.

By the early 1960s, the traffic signs system, introduced in 1933, was seen as inadequate for modern traffic conditions. In response to growing criticism, a Committee was set up in 1961 to review British traffic signs and was chaired by Sir Walter Worboys after whom it was named. The Worboys Committee published their report in 1963. Their recommendations were generally accepted and incorporated into the first edition of the new sign regulations, known as the Traffic Signs Regulations and General Directions or TSRGD for short, which came into force on 1 January 1965.

The Committee investigated traffic signs in great detail, including colour schemes, font types, letter sizes, letter thickness, letter spacing, sign shapes and the use of symbols. They strongly favoured symbols over words, saying that “the use of symbols rather than words made the signs easier to identify from a distance.”. They described the ideal system as a combination of “American shape-colour coding with the European use of symbols” but felt that this would be impractical as “it would not have been consistent with other countries.”. Instead of this ideal, they suggested that the UK should follow “European practice by using largely symbolic signing for warning and regulatory signs without the use of worded plates to explain the symbols”. When choosing a dark background for primary route signs, the Committee recognised the prospect that large signs can be environmentally obtrusive.

The main criticisms of the existing systems were [sic] that:

Great credit is due to the Committee for creating a signing system that addressed points 1, 2, 3 and 5. However, the criticism in point 4 is still a valid criticism of current  signage. While some words and phrases on signs have no obvious alternative pictograms or symbols, a lot of British traffic signs use unnecessary words. Several examples of the use of unnecessary words with alternative signage is shown on the UKMA gallery page at http://www.ukma.org.uk/gallery. There are countless other unnecessary language-specific signs. Here are some examples: 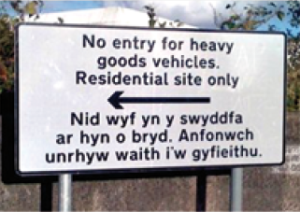 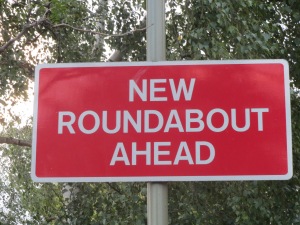 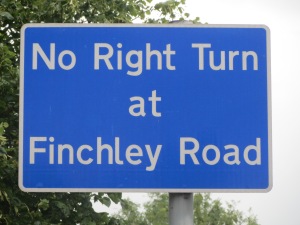 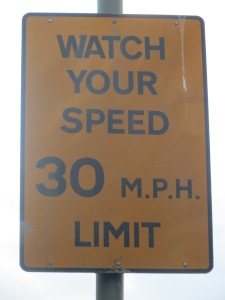 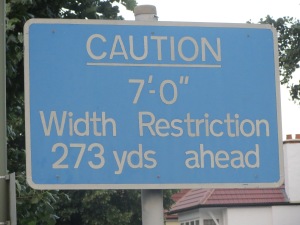 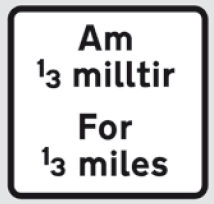 Alternative pictograms and symbols exist for all the images shown above. The continued use of archaic measurement units on British roads requires the use of words and language-specific abbreviations because there are no accepted language-independent international symbols for miles, yards, feet and inches. The pre-Worboys signs were criticised for relying on a knowledge of English and not being consistent with international signs. As long as archaic measurement units continue to be used on British roads, this will remain a valid criticism of current British traffic signs. One obvious lack of consistency with international signage is the use of non-metric units on British traffic signs. Among all developed countries, only the UK and USA use non-metric units on their roads. The UK remains the only European country that uses non-metric units on its roads.

Where words are not used for imperial measurements, the following abbreviations are used for such measurements:

In addition to the use of metric symbols, the UP arrow can be used to mean straight ahead. This symbol is widely used for pedestrian signs. It would also seem sensible to use the 24-hour clock for showing times on relevant signs with a colon to separate hours and minutes instead of the use of English abbreviations, “am” and “pm”. The 24-clock is universally used on railway timetables and for scheduled flights. On signs that show times, a case can be made for  the use of international symbols for hours and minutes.

One major problem with British traffic signage is that there are too many authorised variants for various sign types. This is especially true for vehicle dimension signs. Other examples include sign variants and the use of unnecessary word-based plates shown under pictograms that add no extra useful information. You can find them in the “Know Your TRAFFIC SIGNS” DfT publication: