Followers of Metric Views may have noticed that one of our regular contributors, John Frewen-Lord, has just returned from a visit to the far east. In this post, he passes on some observations relating one of the countries he visited.

It has been said very often in Metric Views and elsewhere that Britain’s former colonies now put the ‘mother country’ to shame in respect of how they have essentially completed their conversion to the metric system, while the UK still lags behind. I recently visited Hong Kong, and found this to be true.

Hong Kong is of course now part of China, more accurately the Peoples Republic of China, and has been since 1997, but is designated as a separate Special Administrative Area. As such, and in spite of Beijing’s recent intrusions into its political affairs, it still essentially governs itself. The country consequently is an interesting mix of Chinese and British culture, lifestyles and ways of doing business. (For example, outside my hotel was a street party, which included a Scottish marching band, complete with bagpipes, yet all the band members were native ‘Hong Kongers’. It was a somewhat bizarre and certainly an incongruous clash of cultures.) It would be true to say however that the Chinese influence is gaining the upper hand.

One of the most obvious aspects that Hong Kong is leaving its British roots behind is in its (almost) total conversion to the metric system. How much of this is due to its own initiatives, and how much is due to pressure from China over the last 17 years, is hard to gauge, but whatever the reasons, imperial measures have almost disappeared.

In Hong Kong, I found the following:

I said earlier that Hong Kong is almost 100% metric – but not quite. A real estate agent I passed had the following sign on display:

I asked the proprietor, a lady in her late 40s or early 50s, what the numbers signified, and she said square feet! The two numbers for each property show gross and net areas. On asking why she showed imperial measures, she explained that it was purely tradition, but that it was a tradition that was fast disappearing, by pressure from Beijing if nothing else.

The following shows a collection of signs I managed to capture. Click on the picture for an enlarged version. 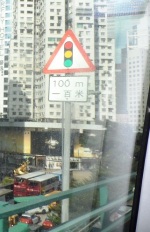 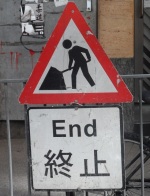