We mark Mr Wiggins’ success in the Tour de France and Mrs Obama’s visit to London with a story that links our nearest continental neighbour with our former colonies across the pond. Those of our readers who are looking for an article about the greatest international sporting festival and the international system of measures which makes it possible must wait until next week.

Every July, the French celebrate their revolution and the Americans their independence from Britain. Here, we take a look at a gift from the people of France that was gratefully accepted by Americans and adopted as their own. No, not French fries, and definitely not the metric system.

Our story begins in France.

In 1865 a group of French intellectuals led by Edouard de Laboulaye decided to honour the ideals of freedom and liberty with a symbolic gift to the USA.  They believed this would draw attention to what they saw as political repression in their own country – France was ruled then by Napoleon Bonaparte’s nephew, Napoleon III. At the same time, nationalism, prosperity and new engineering technology had led to an era of monument building, and Laboulaye’s young sculptor friend, Frederic Bartholdi, seized the chance to create a modern-day Colossus. In 1871 he toured the United States and met President Grant to choose and obtain approval for a site. By 1874, fundraising for the statue had begun in France.

A year later, the USA and fifteen other countries joined France in signing the Metre Convention, signalling the gift to the world by France of the metric system, and affirming the historical links between France and the USA. The UK was a notable absentee from the signatories to the Convention, notwithstanding the contribution its scientists had made to the development of the metric system and the recommendation of a Parliamentary Select Committee that the UK should adopt it.

In 1877, the US Congress authorised a site for the statue on Bedloe’s Island in New York harbour, but provided no funding for a pedestal. This was raised by a public appeal in the USA, supported by the New York newspaper publisher, Joseph Pulitzer. And in 1879, Gustav Eiffel, later to achieve international fame for the design of another iconic structure, was given the job of designing the internal iron framework to support the three hundred copper sheets that form the outer skin of the statue.

Finally, on 28 October 1886, the completed statue was unveiled by President Cleveland. At that time, it was the tallest structure in New York City, and the tallest statue in the world. The height of the monument from ground to the top of the torch is 93 m, the height of the statue itself is 46 m and the thickness of the outer copper sheeting 2.4 mm. As you would expect,  the British pretended to be unimpressed. The London Times wrote: “We wonder why liberty should be sent from France, which has too little, to America, which has too much.” 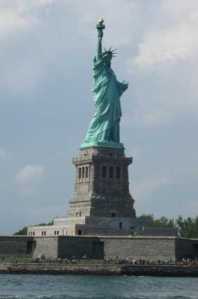 Over the years, Liberty’s image has changed. During the years of immigration up to 1914, she became the “mother of exiles”. During the First World War, she urged citizens to enlist or to buy war bonds, becoming America personified. In later years, her image led political movements, satirised national policy, sold lemons and illuminated living rooms. In 1924 she was declared a US national monument, and in 1956 Bedloe’s Island was renamed Liberty Island.

But hey, here is the contradiction (as seen from a country that was a spectator to these events). At a time when other countries in the world began abandoning customary measurement systems in favour of a rational and coherent alternative, the USA held back, and has continued to do so ever since. The new, alternative system of measures may have been conceived in England, but France, America’s ally in the War of Independence, deserves all the credit for its birth. Yet this appears to have had little influence on US public opinion over the years.

So here we have it. When it comes to gifts from France, the USA enjoys an enduring relationship with the Statue of Liberty but just a passing acquaintance with the metric system. Meanwhile, the countries of the rest of the world, with few exceptions, benefit from a partnership with a simple and universal system of measures. It is for readers to decide who has the better deal.